The William F. Cody Series on the History and Culture of the American West, in association with The Papers of William F. Cody, fosters new work examining the regional, national, and international reach of William F. “Buffalo Bill” Cody and his broad impact on an emergent mass culture. Published by the University of Oklahoma Press, this series emphasizes scholarly monographs exploring the development of the American West and its representation in Wild West exhibitions and other forms of popular entertainment. Series editors seek works examining the Buffalo Bill phenomenon as well as the related movements that shaped and popularized the frontier in American national consciousness. 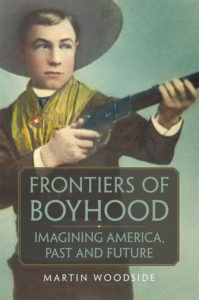 Martin Woodside, Frontiers of Boyhood: Imagining America, Past and Future. Volume 7 in The William F. Cody Series on the History and Culture of the American West (Norman: University of Oklahoma Press, 2020).

This book revisits these narratives of American boyhood and frontier mythology to show how they worked against and through one another—and how this interaction shaped ideas about national character, identity, and progress. The intersection of ideas about boyhood and the frontier, while complex and multifaceted, was dominated by one arresting notion: in the space of the West, boys would grow into men and the fledgling nation would expand to fulfill its promise. Frontiers of Boyhood explores this myth and its implications and ramifications through western history, childhood studies, and a rich cultural archive. Detailing surprising intersections between American frontier mythology and historical notions of child development, the book offers a new perspective on William “Buffalo Bill” Cody’s influence on children and childhood; on the phenomenon of “American Boy Books”; the agency of child performers, differentiated by race and gender, in Wild West exhibitions; and the cultural work of boys’ play, as witnessed in scouting organizations and the deployment of mass-produced toys.

Michelle Delaney, Art and Advertising in Buffalo Bill’s Wild West. Volume 6 in The William F. Cody Series on the History and Culture of the American West (Norman: University of Oklahoma Press, 2019).

Cody’s show team partnered with printers, lithographers, photographers, and iconic western American artists, such as Frederic Remington and Charles Schreyvogel, to create posters and advertisements for Buffalo Bill’s Wild West. Circuses and other shows used similar techniques, but Cody’s team perfected them, creating unique posters that branded Buffalo Bill’s Wild West as the true Wild West experience. They helped attract patrons from across the nation and ultimately from around the world at every stop the traveling show made. In Art and Advertising in Buffalo Bill’s Wild West, Michelle Delaney showcases these numerous posters in full color, many of which have never before been reproduced, pairing them with new research into previously inaccessible manuscript and photograph collections. Her study also includes Cody’s correspondence with his staff, revealing the showman’s friendships with notable American and European artists and his show’s complex, modern publicity model. Beautifully designed, Art and Advertising in Buffalo Bill’s Wild West presents a new perspective on the art, innovation, and advertising acumen that created the international frontier experience of Buffalo Bill’s Wild West. 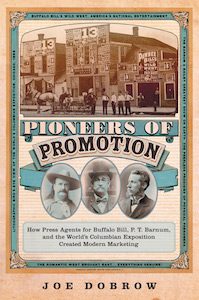 Joe Dobrow, Pioneers of Promotion: How Press Agents for Buffalo Bill, P. T. Barnum, and the World’s Columbian Exposition Created Modern Marketing. Volume 5 in The William F. Cody Series on the History and Culture of the American West (Norman: University of Oklahoma Press, 2018).

In this lively narrative, business history writer Joe Dobrow traces the origins of modern American marketing to the late nineteenth century when three charismatic individuals launched an industry that defines our national culture. Transporting readers back to a dramatic time in the late 1800s, Dobrow spotlights a trio of men who reshaped our image of the West and earned national fame: John M. Burke of Buffalo Bill’s Wild West, Tody Hamilton of the Barnum & Bailey Circus, and Moses P. Handy of the World’s Columbian Exposition in Chicago. Using mostly newspapers—plus a good deal of moxie, emotional suasion, iconic imagery, and to be sure, alcohol—Burke, Hamilton, and Handy each devised ways to promote celebrities, attract huge crowds, and generate massive news coverage. As a result, a plainsman named William F. Cody became more famous than the president of the United States, a traveling circus turned into the Greatest Show on Earth, and a world’s fair attracted more than 27 million visitors. 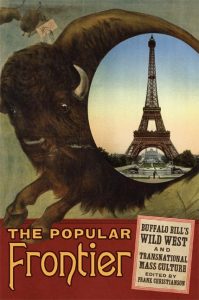 When William F. Cody introduced his Wild West exhibition to European audiences in 1887, the show soared to new heights of popularity and success. With its colorful portrayal of cowboys, Indians, and the taming of the North American frontier, Buffalo Bill’s Wild West popularized a myth of American national identity and shaped European perceptions of the United States. The Popular Frontier is the first collection of essays to explore the transnational impact and mass-cultural appeal of Cody’s Wild West. How did Europeans respond to Cody’s vision of the American frontier? And how did European countries appropriate what they saw on display? Addressing these questions and others, the contributors to this volume consider how the Wild West functioned within social and cultural contexts far grander in scope than even the vast American West. Among the topics addressed are the pairing of William F. Cody and Theodore Roosevelt as embodiments of frontier masculinity. 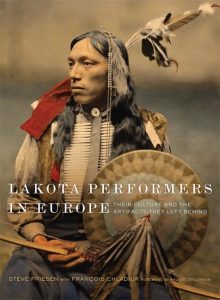 Steve Friesen, Lakota Performers in Europe: Their Culture and the Artifacts They Left Behind. Volume 3 in William F. Cody Series on the History and Culture of the American West (Norman: University of Oklahoma Press, 2017).

From April to November 1935 in Belgium, fifteen Lakotas enacted their culture on a world stage. Wearing beaded moccasins and eagle-feather headdresses, they set up tepees, danced, and demonstrated marksmanship and horse taming for the twenty million visitors to the Brussels International Exposition, a grand event similar to a world’s fair. The performers then turned homeward, leaving behind 157 pieces of Lakota culture that they had used in the exposition, ranging from costumery to weaponry. In Lakota Performers in Europe, author Steve Friesen tells the story of these artifacts, forgotten until recently, and of the Lakota performers who used them. The 1935 exposition marked a culmination of more than a century of European travel by American Indian performers, and of Europeans’ fascination with Native culture, fanned in part by William F. “Buffalo Bill” Cody’s Wild West from the late 1800s through 1913. 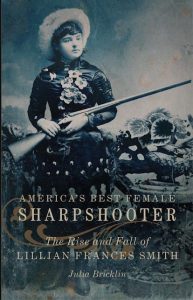 Julia Bricklin, America’s Best Female Sharpshooter: The Rise and Fall of Lillian Frances Smith. Volume 2 in The William F. Cody Series on the History and Culture of the American West (Norman: University of Oklahoma Press, 2017).

Today, most remember “California Girl” Lillian Frances Smith (1871–1930) as Annie Oakley’s chief competitor in the small world of the Wild West shows’ female shooters. But the two women were quite different: Oakley’s conservative “prairie beauty” persona clashed with Smith’s tendency to wear flashy clothes and keep company with the cowboys and American Indians she performed with. Being the best female sharpshooter in the United States was not enough, however, to differentiate Lillian Smith from Oakley and a growing number of ladylike cowgirls. So Smith reinvented herself as “Princess Wenona,” a Sioux with a violent and romantic past. Performing with Cody and other showmen such as Pawnee Bill and the Miller brothers, Smith led a tumultuous private life, eventually taking up the shield of a forged Indian persona. The morals of the time encouraged public criticism of Smith’s lack of Victorian femininity, and the press’s tendency to play up her rivalry with Oakley eventually overshadowed Smith’s own legacy. 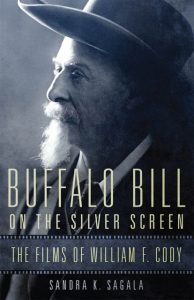 Sandra K. Sagala, Buffalo Bill on the Silver Screen: The Films of William F. Cody. Volume 1 in The William F. Cody Series on the History and Culture of the American West (Norman: University of Oklahoma Press, 2013).

For more than thirty years, William F. Buffalo Bill Cody entertained audiences across the United States and Europe with his Wild West show. Scores of books have been written about Cody’s fabled career as a showman, but his involvement in the film industry–following the dissolution of his traveling show–is less well known. In Buffalo Bill on the Silver Screen, Sandra K. Sagala chronicles the fascinating story of Cody’s venture into filmmaking during the early cinema period. In 1894 Thomas Edison invited Cody to bring some of the Wild West performers to the inventor’s kinetoscope studio. From then on, as Sagala reveals, Cody was frequently in the camera’s eye, eager to participate in the newest and most popular phenomenon of the era: the motion picture. In 1910, promoter Pliny Craft produced The Life of Buffalo Bill, a film in which Cody played his own persona. After his Wild West show disbanded, Cody fully embraced the film business, seeing the technology as a way to recoup his financial losses and as a new vehicle for preserving America’s history and his own legacy for future generations.