Crucial to our understanding of the significance of the Great Plains to Cody’s personal experiences are the early years of Cody’s life, from his birth and early childhood in Iowa in the 1840s through the early 1850s, to his formative years in Kansas from 1852-1868, and his young adult period in Nebraska from 1868-1878. Events that occurred before he wrote his first autobiography and went on to achieve national fame and world-wide celebrity are eventually incorporated first into his stage shows and then into his grand Wild West exhibitions.

END_OF_DOCUMENT_TOKEN_TO_BE_REPLACED 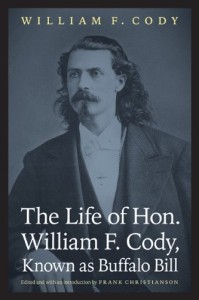 A promotional poster from 1900 superimposes the larger-than-life image of William Cody’s head and shoulders on the side of a running buffalo. It includes the simple pronouncement: “I Am Coming.”[1. According to Joy Kasson this image “shows the power of Cody’s identification with the buffalo and suggests some of the ways in which the Wild West offered its audiences memories of American nature that could be balanced against the claims of progress” (235). Paul Fees refers to the same image in the American Experience documentary Buffalo Bill to suggest the level of Cody’s celebrity at the turn of the century.] The focal point of the advertisement is Cody’s face; the semi-profile wears a calm but commanding expression, staring into the middle distance with a long gray mustache and beard to match the flowing hair that pours out from under a gray Stetson. By the turn of the century, the visual association of Cody with the buffalo was almost redundant. Although he went by his birth name his entire life, he was known to the majority of the public as “Buffalo Bill.” And, while the lithography of the poster faithfully represents the person of Cody, it also presents the persona (the Latin root means “mask”) of Buffalo Bill. That persona was the product of years of careful shaping by Cody and his business associates whose image-making took the form of dime novels, newspaper stories, stage melodramas and, of course, the traveling Wild West exhibition. By 1900 Cody had toured the United States and Europe for nearly two decades; he had performed before Queen Victoria and paraded royalty in his Deadwood stagecoach; he had upstaged the Chicago World’s fair, bringing some four million guests to his own exhibition outside the fairgrounds; he had been the subject of countless dime novels and his media machine had inaugurated a new era in mass culture marketing. By century’s end millions could identify Cody by his face alone, meaning that millions could read the message encoded in the image of Buffalo Bill and assign to it a sweeping narrative that places the American frontier at the center of civilization’s progress.