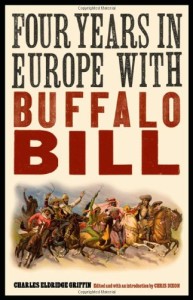 Charles E. Griffin, as he preferred to style himself, was born June 16, 1859 in St. Joseph, Missouri, and, although his mother Fanny was a musician, there was nothing in his family background to suggest the appeal that the circus would have for him and his two brothers, Frank and Fred. All three would make their living in and around a variety of big tents in the late nineteenth- and early twentieth-centuries when the circus and sideshow industries were becoming big business in America and beyond. By 1862 the family had moved to Albia, Iowa, and his father, John Griffin, was Monroe County superintendent of schools and would later be county clerk of courts. It was the “Hawkeye state” with which Griffin always identified and that he always called home.