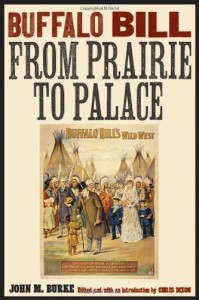 On March 17, 1911, Major “Arizona” John M. Burke, General Manager and Chief Press Agent for Buffalo Bill’s Wild West, bedecked in the green regalia fitting to the occasion walked in a place of honor in the New York Saint Patrick’s Day Parade.  Next day, the New York Morning Telegraph reporting the event quoted his claim to be a “descendent of the Irish kings.”  Such an exaggerated claim was by no means untypical of the man.  Neither was it untypical that he should make misleading comments about his background.

He was not a major in any meaningful military sense of the word.  He had no obvious connection to Arizona.  There was no middle initial ‘M’ in any of the earliest official records.  His claim to Irish descent was, however, unquestionable although he was not necessarily of a royal line.